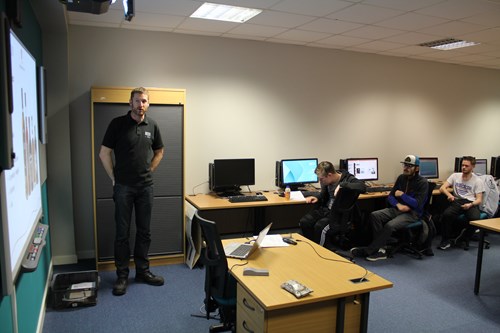 What was unusual though was who was posing them the problem – Colin Dunn from William Grant & Sons.

However, it soon became clear why Colin was there once the students heard him give an overview of the family distillers, who produce Grant’s whisky and Hendrick’s gin from Girvan.

The sheer size and scale of the company, with the amount of liquid that is produced on a daily basis, determines how important engineers are to Wiliam Grant & Sons.

One small problem with just one machine could result in thousands of pounds worth of lost earnings. That’s where Colin and his team come in. Colin is the Process Improvement Lead Engineer in Maintenance, and his job is to identify where processes/equipment can be improved to make reliability better, to make processes cheaper, and to make general engineering improvements.

He posed a common problem to an engineering group at the Ayr Campus: one of the machines is making louder than normal noises – can you identify the problem?

Colin said: “We use a computerised maintenance management system where tasks and fault reports can come in from anyone on site. I just picked a random task off that list which is typical of the thing that the technicians on-site would do.”

William Grant & Sons will be advertising a new apprenticeship opportunity next year, and Colin’s presentation gave our students a great insight into the work involved.

“The idea of me coming here was to let the students see that and get some interest in it. So that when the role is advertised in spring time, they’ll know about it and think about applying.

“What we look for, a lot of it is about the person. Their attitude to engineering, a person’s ability to communicate, and their potential for technical ability. With an apprentice you’re not going to get the finished article as a technician, it’s someone we’re going to develop. A bit of it is about the academic background, but that’s not the major thing. As far as gender and age are concerned, we’re completely open about that.”

Shape children’s lives, and your career