Uniformed Services course put me on the right track 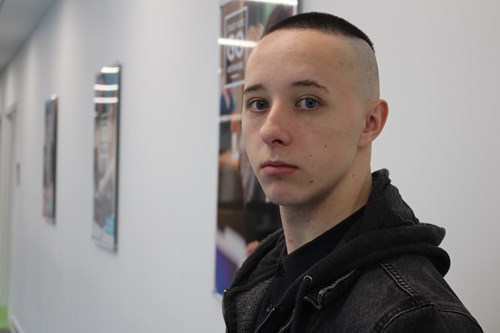 Kieren Stirling approached the Army two years ago while he was still at school, but wasn’t able to start right away because of health issues.

So instead he came to college, studying for two years on our Uniformed Services course. This helped to inform him of the options available to him, and while he initially wanted to join the Infantry, he has now signed up to the Royal Tank Regiment and will start in January.

Here he explains what the Uniformed Services course did for him personally and why you should consider it.

“When I first applied for the Army, to be honest with you I was jumping in head first without knowing much about it. I got deferred for two years due to migraines, so that gave me a chance to study up on it and train for it.

“The course gave us a better insight into everything and changed my mind. I still wanted to join the Army - I have done since I was 10 years old - but I think joining the Royal Tank Regiment will open up more doors for me after the Army. I should be able to progress into engineering or HGV driving for example, and will pick up countless transferrable skills.

“The course simply teaches you everything you need for a career in the services. You get out there and engage with all of the different uniformed services, and they give you their insights into what it’s really like.

"They’re all closely linked. For example, if I decided I wanted to do police while also keeping in with the Army, I could apply for the military police.

“Originally, I was going to study Sport and Fitness, but they asked me what I was wanting to do that for. When I mentioned I wanted to get my fitness up for the Army, they brought up the Uniformed Services course. So that’s how I found out about it, and I really enjoyed it.

“The fitness is mainly cardio based with some strength building, which most of the services require.

“The majority of the people on the course were looking to join the police. About four of us were interested in the military, two wanted to join the marines, but it was mostly police.

“Once I finished the course, my deferral was up and I had to send in my medical notes to prove that I’d not had the migraines since. Then they phoned me up with my assessment centre date. That was 13 August, which involved a full-day medical, a 2km run which needs to be achieved in 10 minutes, and Maths, English and problem-solving tests.

“I go away to Pirbright in January for my phase one training. I’m just keeping myself ticking over right now, putting myself through fitness training that I expect down there. There will be no big Christmas dinners for me this year! I’ve been looking after myself - I joined a local boxing club, not for fighting but just general fitness work.

“I’ll be away for 14 weeks, which gets me my basic weapons training, fitness, a lot of outdoor exercises like rock climbing, cave searching, and a lot of team building tasks. I’m really looking forward to it.”

Shape children’s lives, and your career