Former music student, Jubemi Iyiku aka Bemz tells us about his time at college and what his plans are for the future.  Bemz is a rapper based in Glasgow but Ayrshire is where he calls home.

What did you enjoy about college?

The people that I met and connected with were very important to me. The lecturers were fantastic and were the driving force for me staying on the course doing what I love to do.  They saw what I was good at and encouraged me to achieve it.

I always had an interest in music and knew that was what I was going to do.  When I was at college, there was a lecturer called Ricky and he was fundamental in keeping me on the right path and allowed me to express my creativeness.  The other students on the course were all interested in band music, but I wanted to do something different.  So being able to have a lecturer who took the time to understand my creative path was amazing. He linked me with people on other courses doing the same style of music as me.  One of the guys that he linked me with, I’m still working with 9 years later and he is one of my main producers just now.  I was the only person in my class who was interested in hip-hop, whereas many of the other students were interested in being in a band and wanted to do rock. 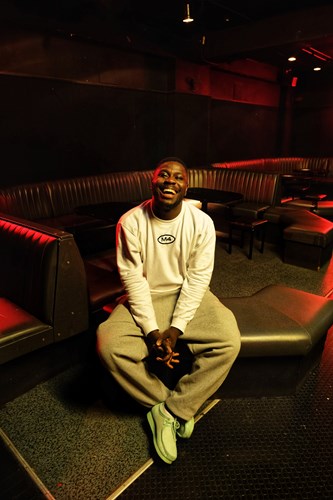 Have you had to face any challenges during your time at college, and if so, how did you overcome them?

After my first year of college, I took a year out to figure out if this was the right course for me.  I came back a year later to do my HNC and once I’d completed the course, I knew it was the right choice for me.  I soon realised that I wanted to go ahead with a career in the music industry.

The main challenge in Ayrshire was, there are not a lot of people wanting to be rappers, so it was tough I had to try to make the course work around my interests and it has taught me a lot of basic skills that I still use now in recording sessions.  I can turn up to a recording studio and set my own mic up and set my own levels.  For me, it was understanding that the course content wasn’t all for me at that point in time but the skills that I learnt then, I am still using now.

What tips can you pass on to new students to help them get the best experience at college?

Try and take in as much as you can, as being at college or university gives you the solid foundation that you can build on when you leave.  Not everything might be suitable for what you want to do at that point in time, but what you soon realise is the more you grow, the more you try to be involved in the music industry, you realise that at some point, even the basic things that you didn’t realise you were taking in will become really important to know.

Be true to yourself and try your best to take it all in and absorb as much knowledge as you can, as that sets you up nicely for the future.

What are your career plans?

Music is my main priority and I want to do that, but I’d also like to get into running workshops for kids, especially in Ayrshire.  I’d actually like to open a youth workshop to teach kids how to be creative - I use music as therapy and use it to express how I feel.

I’d like to help kids find new ways to express themselves, especially if they are going through things.  That is something I would like to do in the future and hopefully one day return to Ayrshire College and talk to students or something like that.

For me right now, I want to build a brand and perfecting my craft to the point that I am satisfied with it.

I want to send my gratitude to the College for the things I was able to learn when I was there – whether that be big or small.  I am grateful for everything that was provided for me.  When you’re young you don’t realise that there are people out there that have your best interests and can see the bigger picture before you do. So, it is just being able to understand that and having respect for the people who came up before you.

Click here to check out Bemz as he performs ‘Bando 2 Studio’ for BBC Music Introducing.

Check out Bemz on Spotify

Aidan tells us how the ILM Award helped with his career!

Now's the time to look at your leadership skills!

Tree Surgery course is perfect for this budding horse logger