A memorial bench for Adrian McCallum, known in the professional wrestling world as Lionheart, has been unveiled at Ayrshire College’s Kilmarnock Campus.

Adrian was a former student of Ayrshire College and remained a close friend to the Sport and Fitness department as he embarked on his successful wrestling career. He was one of the first celebrities to give his backing to the College’s mental health awareness campaign #PassingPositivity when the campaign was established by students in 2019.

Tragically, Adrian took his own life later that year, and Ayrshire College students and staff paid their respects by taking part in a charity ‘Walk 4 Lionheart’ in 2020. Now, during Men’s Health Week and ahead of the second anniversary of Adrian’s death, they have placed a permanent tribute at the wellbeing area of the Kilmarnock Campus.

The memorial bench was made by Ayrshire College lecturer Craig Barrie and his pupils who are on a School-College course in joinery at Ayrshire College and was unveiled by former Sport & Fitness student Ross Munro. Ross is a full-time wheelchair user who has Duchenne muscular dystrophy, and last year he got out of his wheelchair for the first time in four years to walk 16 metres – from his bedroom to his living room – for the ‘Walk 4 Lionheart’.

Adrian’s parents and friends from the wrestling world and beyond attended Ayrshire College on Friday 18 June to pay their respects at the bench, where there is also a planter and plinth with a message that is significant to Adrian and others: ‘Don’t Forget Who You Are, Believe’.

One of those in attendance was former Insane Championship Wrestling (ICW) Heavyweight Champion, Jack Jester, who later tweeted: “Lovely day through at Ayrshire College unveiling a bench in memory of Adrian “Lionheart” McCallum. This time of year is always tough but it’s great to be able to celebrate his life and everything he achieved in a place that meant so much to him.”

Comedian, WestFM breakfast show host, and wrestling announcer Billy Kirkwood also wrote: “An honour to be invited along to the unveiling of the Lionheart bench at Ayrshire College in Kilmarnock. Put together as part of the #PassingPositivity campaign.

“The bench will be there 24/7 as a safe place to visit, gather your thoughts or chat as part of your mental health check for not only the students at the college but for anyone needing that time out. Please do visit, I know I will.

“A wonderful tribute by friends, family, the team at ICW and all that attended.”

Thanks to JW Grant for supplying the memorial bench materials free of charge. The Ayrshire College Foundation has also allocated money for the development of a sensory garden in the wellbeing area where the bench is situated, which will be maintained by Ayrshire College’s Supported Learning students. 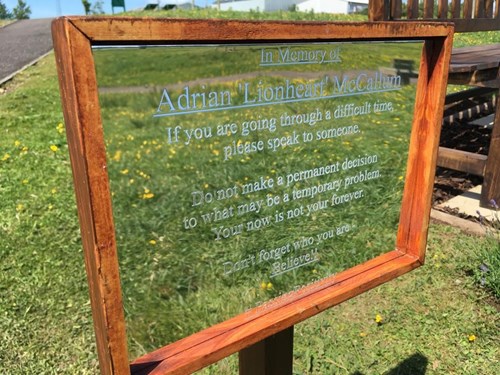