Four Ayrshire College students and a lecturer were involved in a critically acclaimed documentary feature film called Off the Rails – which could be shortlisted at the 2023 Academy Awards after winning a qualifying festival award.

Ayrshire College lecturer David McAulay was the Sound Designer on the documentary, and received assistance from HND Sound Production students Callum Gibbs, Ethan Hodge, Taylor Jess, and Brandon Munro who were Foley Artists for the film.

Off the Rails is about young boys who are into parkour and other death-defying stunts who are trying to process the grief of losing people close to them. Earlier this year it won best international film at the 2022 Doc Edge festival in New Zealand; an Oscars qualifying festival.

Sound Production lecturer David McAulay has bags of experience working on music albums and films, and often uses this work to contextualise his teaching and give his students first-hand insights into industry practice.

Ayrshire College’s HND Sound Production course involves a unit called Foley and Automated Dialogue Replacement. Foley is the art of using the body to recreate or enhance sound effects live and in sync with the picture using various props. The most common use of Foley is to create footsteps.

Callum, Ethan, Taylor and Brandon assisted David to create the sounds for jumps, running, scrapes and more, using a studio at Ayrshire College.

By winning at the Doc Edge Festival, the film is now on the long list for the 2023 Academy Awards.

David McAulay said: “I am over the moon to have been able to provide this fantastic opportunity for the students, providing them with a brilliant accolade to assist with their post college journey. They now have their name on an award-winning film and even have a shot at the Oscars!”

Callum Gibbs said: “I really enjoyed working with Davey on this film and build upon the knowledge I gained from the course. It was great to experiment with sounds and see the film slowly piece together.” 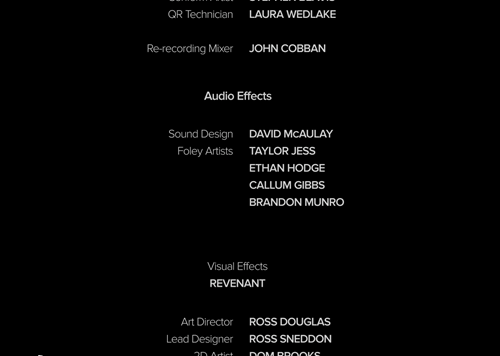