Staff run for miles to support a great cause

Paul Minter is running over 5,000 miles around the UK coastline to raise funds and awareness for Head Up, a new Armed Forces charity who are developing a 7-day positive mindset retreat. The aim is to tackle the increasing and worrying suicide rates within the UK military.

Paul is passing through almost every coastal town in the UK and, to help support him and the work of the charity, some of our staff decided to join him. Estates Team Leader, Michael Sykes, and Science and Engineering Lecturer, Alan McDowall, ran with Paul from Girvan to Troon, with a pit stop at Ayr Campus to show the College's support for his cause.

Paul is encouraging people to join him as he passes through their area. This will help to motivate him and raise more awareness about an important cause that will help save and improve the lives of thousands.

“We had been tracking Paul and knew when he was going to arrive in Girvan from Stranraer. The next day was the Ayrshire coastal path from Girvan to Troon. I met Paul when he arrived in Girvan and arranged to meet and run alongside him the next day. We set off from Girvan to Troon and picked up my colleague and friend Alan at Dunure. It was great training for the West Highland way race that Alan and I are doing in June.

We visited the college’s Ayr Campus for photos before heading back out on the trail to finish at Troon. 32 miles and 4500ft was our day together, but Paul does those days every day and won’t finish until October in Liverpool.”

Paul was so thankful - for the College's overall support with raising awareness, for the influx of donations he feels came as a result, but mainly for the company! He sent us this video!

You can follow Paul’s run and track his progress. Or click here for further information and to support this great cause. 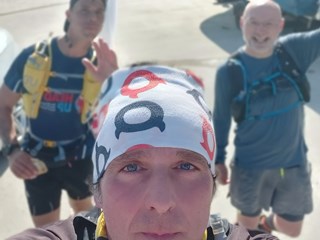 Glorious day for a run!